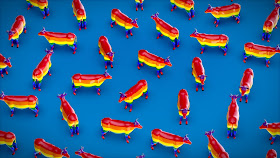 Our world is really fired up about diversity these days. In America, we've moved well beyond the skin pigment acts and orders of the 1960s and the homosexuality hush of the 1990s. We've entered into a strange pseudo-reality that tells us the world is ending next week unless we take money from well-to-do white people and give it to ultra-minority transsexuals who will save the planet. "How will they save the planet exactly?" you may ask. They'll deliver us through the government savior, who will take us to work, murder our children, and actively prevent bovine flatulence. Or something like that.

Now certainly the incremental, governmental directives of years past have pushed our culture to this point. However, we would do well to notice just how senseless these secular mandates are becoming and how fast we are headed toward total collapse. For instance, just eight years ago, the gold standard was debated on the House floor in Washington. It's an intellectual and worthwhile conversation. Conversely, a mere eight months ago on that same House floor our government passed a bill that tells bakers everywhere that they'll have to do what the gay guys say -- or else.

How did we get here? We arrived at this place by rejecting truth absolutely. The objective reality that exists outside of our personal preferences -- namely that God exists, He designed this place, and we are to conform to His design -- has been utterly disregarded. In fact, there's a very short list of objective truths that secular America claims to hold to. At the top of the list are (1) There is no objective truth, and (2) You're wrong.

To put it another way, Doug Wilson has said, "Atheists are absolutely certain of two things: God does not exist and they hate Him." Our godless culture does not want to hear about the Sovereign who sits in the heavens and does whatever He pleases. They don't care to read about His holy justice. They reject Him because they hate Him.

So what do you get when you take away the elementary principle of reality, the very presence of God, and simultaneously prioritize diversity? Total insanity, of course. And we're living it. Decisions being made at Yale to cut courses based on the existence of white people in history is making it difficult to discern reality from satire. Men dressed as women are inviting children onto their laps -- and the parents are driving the children there to experience it. This is stupidity -- really.

Yet all of this can be stopped, but it can only be stopped one way. Truth must enter stage right and the light has to shine upon Him. He must speak and His hearers must be in total submission.

If this doesn't happen, the end is death. There's a way that seems right to a man, but the grave awaits him at the finish line. Herein lies the fundamental choice.

"Hot takes" are personally held opinions that, when made public, generally disturb those who hear them to one degree or another because they are minority opinions. As an example, a food-based hot take may be something like "Cheetos taste best when dipped in ketchup." This may or may not be a hot take of my own, which I've decided to share publicly for the first time today.

Nevertheless, I do tend to hold to hot takes, many of which pertain to humanity and the objective reality of good and evil. These hot takes include, but are not limited to the following.


1. Truth exists, whether you like it or not.
We don't get to decide on reality. Reality exists apart from our own desires.


2. The Bible contains truth, the things God wants us to know.
The Bible is Holy Scripture. God, the Author of all things, has revealed truth to man in the Bible.


3. Men and women are made in the image of God.
Human beings, possessing God-given genders, have value and qualities that set them apart from the rest of creation.

4. Man was created to worship God in all things.
In the garden where Adam and Eve were placed, all was good and perfect. That state was to continue as humanity served God and was fruitful and multiplied.

5. Man is sinful.
Adam willfully sinned against God. Now, the decisions each of us naturally make are intended to serve ourselves instead of the God who made us.

6. Jesus is God and He hates sin.
The Lord Jesus is the God of all creation and He has told us what is good and right. When man rebels, He is rightly wrathful.

7. Jesus deals with sin.
The Lord Jesus lived a perfect life and died a perfect death on behalf of those who will believe in Him. Those who don't believe will hear Jesus say "Depart from Me," as they are sentenced to hell.

8. The redeemed life is to be one of restored worship.
As elect members of humanity experience salvation, those men and women are led to repentance by the Holy Spirit and their lives are transformed as they begin to worship God in all regards.

9. The glory of the Triune God fixes our mess.
As Truth storms the castle of man's heart (which, as Calvin said, is a "factory of idols"), our desires are slowly but surely conformed to His and our perspective and worldview aligns with good order.

Now, to much of the world, there are some real eye-popping assertions listed here. But this is merely historic Christian orthodoxy. These "hot takes" are the foundation of a worldview that can get the children off of the laps of transgender strangers. These truths would be able to guide a university like Yale in how they process and teach history. And these truths, when rejected, remain as unmovable pillars of reality that mock our current cultural insanity. This is what's at stake.

I referred to Truth as a "Him" above. This is no literary personification, but rather it's an acknowledgement of Christ as the Truth. The Lord taught us this in John 14.


Thomas said to Him, “Lord, we do not know where You are going, how do we know the way?” Jesus said to him, “I am the way, and the truth, and the life; no one comes to the Father but through Me. If you had known Me, you would have known My Father also; from now on you know Him, and have seen Him.” (vv. 5-7)

When sinful men and women come to die before the Truth, that is, they recognize the total repentance needed to follow Christ, true diversity comes about as a fruit of that dead seed. Jesus taught us this in John 12.


"Truly, truly, I say to you, unless a grain of wheat falls into the earth and dies, it remains alone; but if it dies, it bears much fruit. He who loves his life loses it, and he who hates his life in this world will keep it to life eternal. If anyone serves Me, he must follow Me; and where I am, there My servant will be also; if anyone serves Me, the Father will honor him." (vv. 24-26)

Upon the spiritual death of a sinner, new life is born and that life is full of God-honoring potential that is realized over time. Diversity is a true aspect of this fruit and can be recognized in a number of ways as Christ builds His church brick-by-brick, one sinner after the other.


So the problem is not that diversity is bad. Diversity is God's idea. In fact, in the Godhead there are three Persons, none of whom are the other. They are distinct, co-eternal Persons who all share in the same Divinity as the one, true God. Diversity is, indeed, good.

But diversity without truth is quite bad. It's evil, in fact, and it must be rejected. When the road to diversity does not start with reality, the whole of it can be rightly characterized as foolish and wayward. However, when objective reality is embraced as the foundation of diversity, that's when we can really have it. We must embrace a biblical worldview as our root system before we can enjoy the fruits of diversity.

Thus, I hope this article has served you well in your judgment of the world you live in and, if nothing else, helps you in processing just what exactly is going on now that the elementary school down the street is teaching that down is up and math is a mere opinion. Jesus is the same yesterday, today, and forever, and He is faithful. Go serve Him.
Jeremy Howard
Share